Days after print publication, Bill Knight’s syndicated newspaper column, which moves twice a week, will appear here. The most recent will appear at the top. (Columns before Sep. 11, 2017, are archived at http://billknightcolumn.blogspot.com/).

A troubling trend of anti-protest legislation is growing, but recent successes in Republican statehouses isn’t new. There were earlier attempts, including one in Democratic-majority Illinois that failed, barely.

Illinois dodged a bullet – or a Buick.

The “crackdown” isn’t necessary since laws exist to punish violators, and implied permission to run over demonstrators with cars is crazy. But its intention is to chill involvement – “part of a larger trend of conservative, Right-wing efforts at the state level designed to counter the goals of social movements,” commented Traci Yoder of the National Lawyers Guild.

As lawmakers dabble in restricting protests, imagine how anti-protest laws would be applied to a White counterdemonstrator in camo at a Black Lives Matter rally and then picture a Black man driving through a gun-rights march.

That’s chilling alright, but not the way Right-wingers want.

In Illinois in 2019, HB 1633 sought to increase penalties for nonviolent conduct at some demonstrations. Backed by the fossil-fuel industry, it passed the Illinois House that April, 77-28.

Despite a clever divide-and-conquer tactic exempting unions from its provisions (ex-Illinois AFL-CIO president Michael Corrigan and Mark Denzler, president of the anti-union Illinois Manufacturers Association sent a joint letter endorsing the bill), a diverse coalition including unions (such as the Illinois Federation of Teachers, Letter Carriers and SEIU) plus civil-liberties advocates, environmental organizations and community groups like the Jane Addams Senior Caucus finally explained that it may have been intended as a warning to protestors, but it also was a step in a slippery slope toward repressing 1st Amendment rights.

“Any legislator who is concerned about climate change, about free speech, about criminal justice, now would be the time to stand up against this bill, which bad on all of these things,” Natural Resources Defense Council/Illinois’ J.C. Kibbey said.

The bill’s chief sponsor, Sen. Michael Hastings (D-Matteson), pulled the measure, presumably due to criticism after its passage in the House, telling CapitolFax’s Rich Miller, “I had serious concerns as to some of the provisions.”

Two years later, other state capitals moved from hosting lobbyists from Chevron, Dow and Shell, plus pipelines and refineries, to welcoming critics of Black Lives Matter demonstrations, and some 80 bills have been introduced in 34 states recently, according to the International Center for Not-for-Profit Law (ICNPL).

The American Civil Liberties Union (ACLU) said, “It’s no coincidence that these bills were introduced by politicians who harshly criticized calls for racial justice and police accountability.”

The Right-wing American Legislative Exchange Council (ALEC) wrote the model bill targeting protests, and versions redefine “riots” to include as few as three people, and make people just attending demonstrations vulnerable to prosecution – even if they break no laws.

Some also limit liabilities for those who run over protestors with cars. (USA Today reported 104 incidents of vehicles driving into protestors last summer, 8 by police, but the current campaign’s implicit acceptance of the act could spark copycat action. In fact, a motorist in June plowed into a small group of protestors in Minneapolis, killing one and injuring three.

Opponents caution that anti-protest isn’t about preventing property damage, but to silence activists in reaction to actions like the Black Lives Matter actions from coast to coast and the Dakota Access Pipeline protests at Standing Rock.

The main goal isn’t to protect the public or even private corporations. It’s to curtail demonstrations, especially effective ones such as mass gatherings, dramatic actions or civil disobedience by having some think, “The penalties aren’t worth the risk.”

If such laws had been enacted in the last few years, ACLU attorney Max Gaston told In These Times magazine, “virtually every major demonstration, from the Women’s March to the March for Our Lives, would have involved a heightened level of danger from police and counter-protestors.”

In Florida, where the bill passed, Democratic State Sen. Jason W. B. Pizzo commented to the Washington Post that the law is as “overreaching dragnet,” a “solution in search of a problem.”

Law-enforcement advocate Barney Bishop tried to defend Florida’s bill as even-handed, claiming to Salon, “Florida is as opposed to the Proud Boys as we are to far-Left groups,” but he added that violence is incited by people like “George Soros and Antifa and Black Lives Matter” (although 95% of BLM protests last year were peaceful, according to the Armed Conflict Location & Event Data Project).

The laws’ “language is so sweeping that it encompasses way more than what people imagine,” said ICNPF’s Elly Page.

Hall of Fame is ‘Grace-less,” but at least there’s Jim Thome

Reader feedback was mixed to a recent column expressing regret that the National Baseball Hall of Fame’s rejected Mark Grace (again, the only ballplayer to lead the Major Leagues in hits in a decade not elected to Cooperstown besides Pete Rose). Some shared my sense of injustice at Grace’s snub, and others said he deserves ostracism for his history of DUIs, which can be dangerous to others as well as irresponsible, and the private Hall of Fame and voting baseball writers are free to honor more exemplary athletes such as fellow first baseman and Illinois native Jim Thome.

Fair enough. Thome was respected as a hard-nosed player and a nice human being, both factors in his 2018 induction into the Hall of Fame on his first year of eligibility. He deserves the recognition.

Born in Peoria in 1970 to Joyce and Chuck Thome, James Howard Thome was the youngest of five kids and grew up watching his family play sports, and playing with them. (Eventually, Thome wore his baseball pants “old-school,” with his socks showing to his knees, in tribute to his dad and grandpa, who wore their uniforms that way in softball and minor-league competition.

Jim played sports in youth leagues and in school in Bartonville, Ill., where he played basketball as well as baseball, and earned All-State honors. Not drafted by Major League Baseball, Thome enrolled and played both sports at Illinois Central College, where at a game in Chicago he caught the attention of scout Paul Hoynes of Cleveland, which drafted hm in the 13th round in 1989.

Thome’s athletic potential and character may have been inherited and shaped at home, but his talent and endurance came from his work ethic and from coach and manager Charlie Manuel, who became his mentor. (Manuel – Thome’s manager or hitting coach from 1991 to 2002 – suggested Thome mimic the character Roy Hobbs from the film “The Natural,” pointing his bat toward the field before the pitcher was set.)

Invited to the Indians’ pre-season camp, Thome didn’t make a roster and stayed at extended spring training. In 1989 and 1990, Jim played in rookie-league clubs in the Gulf Coast League and the Appalachian League.

Mid-season in 1990, Thome was promoted to Class-A Kinston in the Carolina League, and the following year he made the jump to AA ball for the Canton/Akron Eastern League affiliate. After 84 games there, Jim was moved up to Colorado Springs in the Class-AAA Pacific Coast League for 41 games and had his major-league debut on September 4, 1991.

He split time in 1991-93 between Cleveland, Colorado Springs and Charlotte, in 1994 was promoted to the majors where he stayed.

A premier power hitter, the right-hander batted left, and partly in response to errors at his initial third-base position, Cleveland in 1997 moved him to first, letting him focus less on defense than offense. That year he made the All-Star team for the first time.

Despite a few years of various injuries, the 6’4” slugger became a five-time All Star and played for Cleveland, the White Sox, Minnesota and Baltimore in the AL, and the Phillies and Dodgers in the NL.

Thome became just the 23rd ballplayer to hit 500 home runs (his was at US Cellular Field in Chicago –on the White Sox’s 2007 Jim Thome Bobblehead Day!).

Sportswriters affectionately called Thome a “throwback,” a player with old-fashioned approaches and attitudes.

He was humble, too.

“I am a guy from Peoria, Illinois,” Thome said. “Never, ever, growing up as a kid did I think my name would someday be mentioned in the same sentence with guys like Babe Ruth, Mickey mantle or Reggie Jackson.”

Off the field, Thome’s activities were also impressive. His charitable work ranged from the United Way and the Make-A-Wish Foundation to literacy and anti-hunger campaigns. MLB honored him with the Roberto Clemente Award for community involvement and the Lou Gehrig memorial Award for his giving character. Elsewhere, the Baseball Writers Association gave him its 1995 Good Guy Award; the MLB Players Association named him 2001’s Man of the Year; and the Sporting News chose him as “No. 1 Good Guy” for his philanthropy.

So, yes: Thome is deserving, no doubt. Still, for baseball fans, it’s not Thome vs. Grace, or an “either/or” question.

It should be a “both/and” recognition. 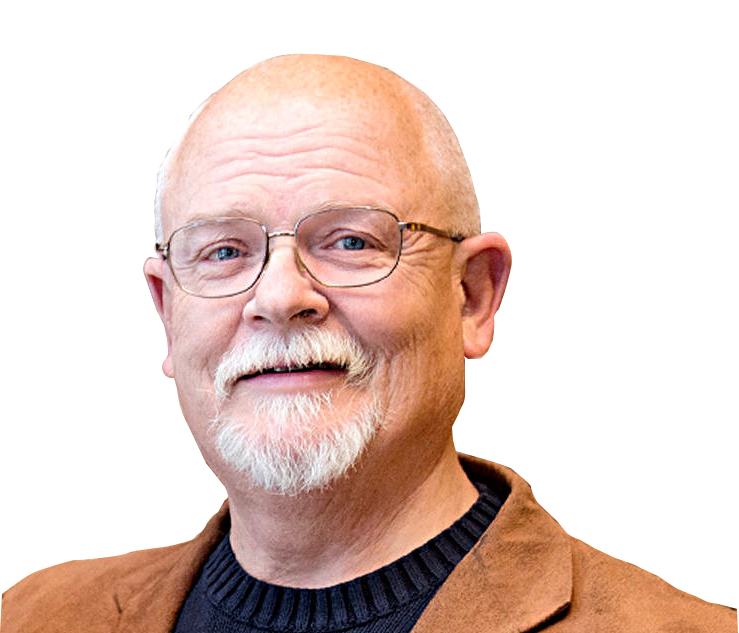 Bill Knight is an award-winning journalist whose column has been distributed for more than 13 years, at first three times a week, then twice a week since 2008.

The author of the 2003 books Video Almanac and Fair Comment: Essays on the Air, Knight for 25 years did weekly commentaries on public radio, first on Peoria’s WCBU-FM 89.9, then on Tri-States Public Radio (WIUM-FM 91.3)

His most recent books are Horse Shoe Bottoms (2008) – a 1930s novel by west-central Illinois journalist and activist Tom Tippett, for which he wrote the biographical introduction and edited – and Rick Johnson Reader: Tin Cans, Squeems and Thud Pies (2007) a collection of rock criticism, essays on popular culture, and zany missives by Johnson, the late Creem magazine writer who attended Western Illinois University, where Knight taught journalism from 1991 to 2012.

A Peoria Journal Star reporter, reviewer, feature writer and editor for seven years, Knight for six years prior to that edited the Midwest weekly the Prairie SUN, and he also worked in public-affairs reporting and feature writing for radio stations such as Peoria’s WMBD and Bloomington’s WDQX. He’s also contributed to the bi-monthly Labor Paper in west-central Illinois since 1991, the The Community Word monthly in Peoria since 2007, and The Weekly Post in rural Fulton, Knox and Peoria counties in Illinois since 2013.

Knight wrote three nonfiction anthologies – R.F.D., R.F.D. Journal and R.F.D. Notebook – and the audio tape collection The Edge of Knight, edited the trade paperbacks Midwestern Gothic and Peoria People, coordinated the round-robin murder mystery novel Naked Came The Farmer, first published columnist Walt Brasch's books Enquiring Minds and Space Aliens and Sex and the Single Beer Can, and co-authored The Eye of the Reporter with Deckle McLean and The Cub Fan's Christmas Wish with Mike Foster – the latter accepted for inclusion in the National Baseball Hall of Fame.

Knight got his start in journalism delivering the Des Moines Sunday Register and phoning in basketball game results to area sports desks, and was first paid for writing for covering Carthage (Ill.) High School football games for his hometown Hancock County Journal in 1966.

A member of the International Society of Weekly Newspaper Editors, he won the international Newspaper Guild’s Service Award in 1990.

The round-robin murder mystery Naked Came The Farmer, Rick Johnson Reader, and Horse Shoe Bottoms all remain available at amazon.com. For the rest of Knight’s books -- or if you'd like a signed copy -- order books directly by sending a check or money order to Mayfly Productions, P.O. Box 380, Elmwood, IL 61529-0380. 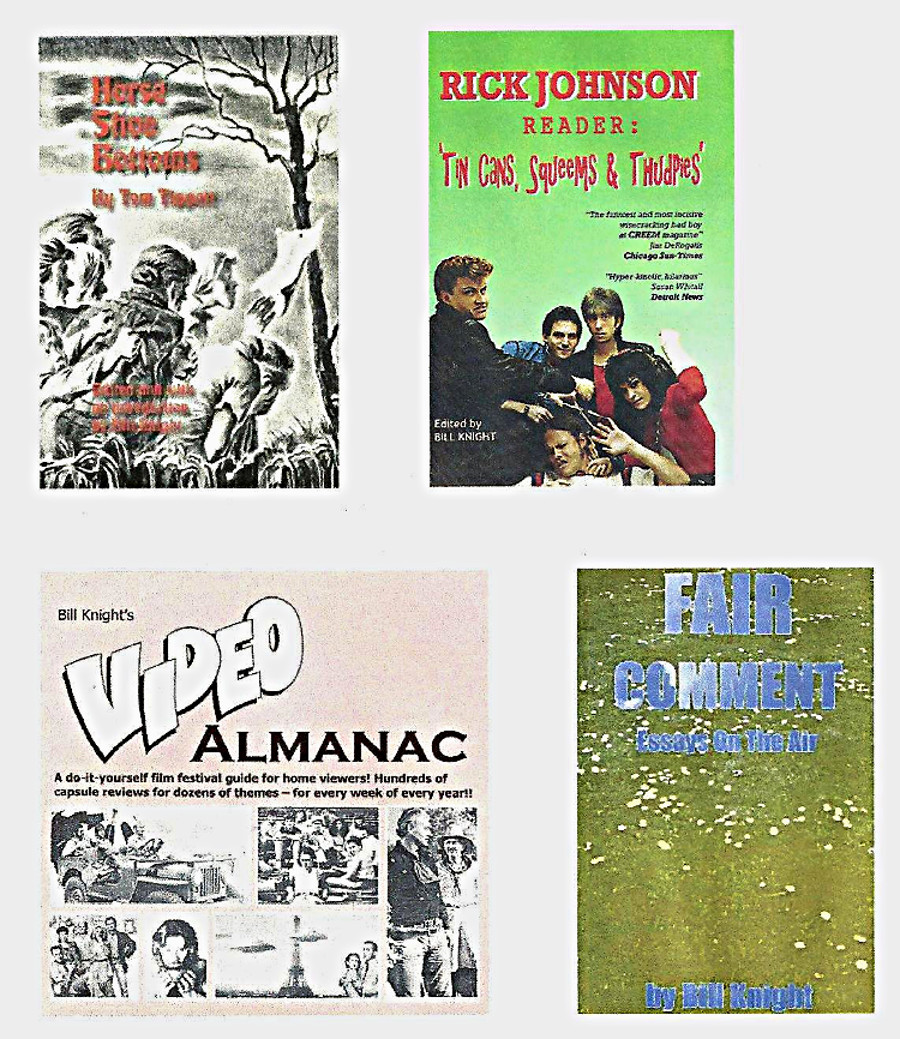